Routine discussions on deciles will recommence in late 2015 but the maps will continue to be updated. 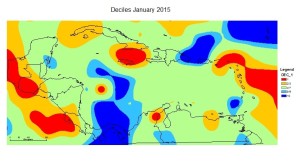 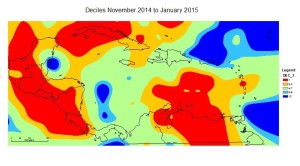 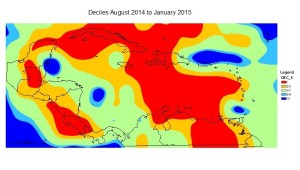 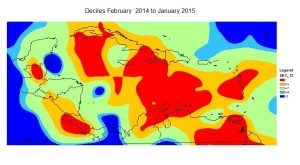 The information contained herein is provided with the understanding that The Caribbean Institute for Meteorology and Hydrology makes no warranties, either expressed or implied, concerning the accuracy, completeness, reliability, or suitability of the Outlook. The information may be used freely by the public with appropriate acknowledgement of its source, but shall not be modified in content and then presented as original material.

The maps produced used Decile values calculated from monthly rainfall totals from land stations and NCEP/NCAR reanalysis data. Note that the severity implied by the index is relative to what is normal for that period of consideration. Normal in the drier season reflects less rainfall than in the wetter season.