Below are links to charts of Monthly and Seasonal rainfall values. Click on each of the thumbnail images to see the respective full image. 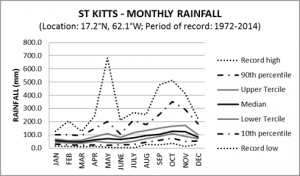